Back to minecraft.net
X

Do the Minecraft Bedrock and Java editions of Minecraft share the same biomes?

Yes, both Bedrock and Java will have usually have the same biomes. However, due to the games being updated at different times you may see a temporary discrepancy. Other in-game locations such as villages and temples are different between versions.

The plains are a very common biome, they spawn a lot of passive mobs such as pigs, cows, sheep, and horses. They usually border forests. Sunflower plains are a variation of the plains biome. Sunflowers can only be found in this biome.

Forests are a very nice to start out in due to the number of trees nearby for harvesting wood. There are other variations of forest. The flower forest will grow nearly every kind of flower in the game. Birch and dark oak forests are just normal forests with the variations in the colors of trees being dark or birch. Additionally, some large mushrooms that can occasionally be found there. Dark oak forests are the only biome that can spawn woodland mansions. Be careful because they can contain hostile mobs.

Desert biomes are very bare. They contain sand, sandstone, dead bushes, brown rabbits, and cacti. Desert villages, pillager outposts, temples, and wells with some lakes are sometimes found in the biome as well. Desert lake biomes are an oasis found in the desert biome. 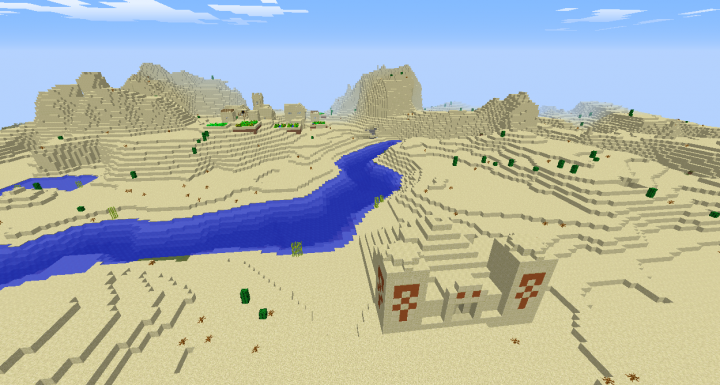 Taiga biomes are a combination of the jungle and forest biomes. They typically have spruce trees and ferns. Taigas can contain wolves, foxes, sweet berry bushes, villages, pillager outposts, and more. One variation of the taiga biome would be ‘giant tree taiga’. This variation contains much larger spruce trees and mycelium on the ground. Snow taiga biomes combine taiga biomes with snow; they can have wolves and arctic foxes. Taiga mountain biomes are a bit more difficult to traverse due to the mountains and hostile mobs in the area.  Additionally,this biome can also be snowy. 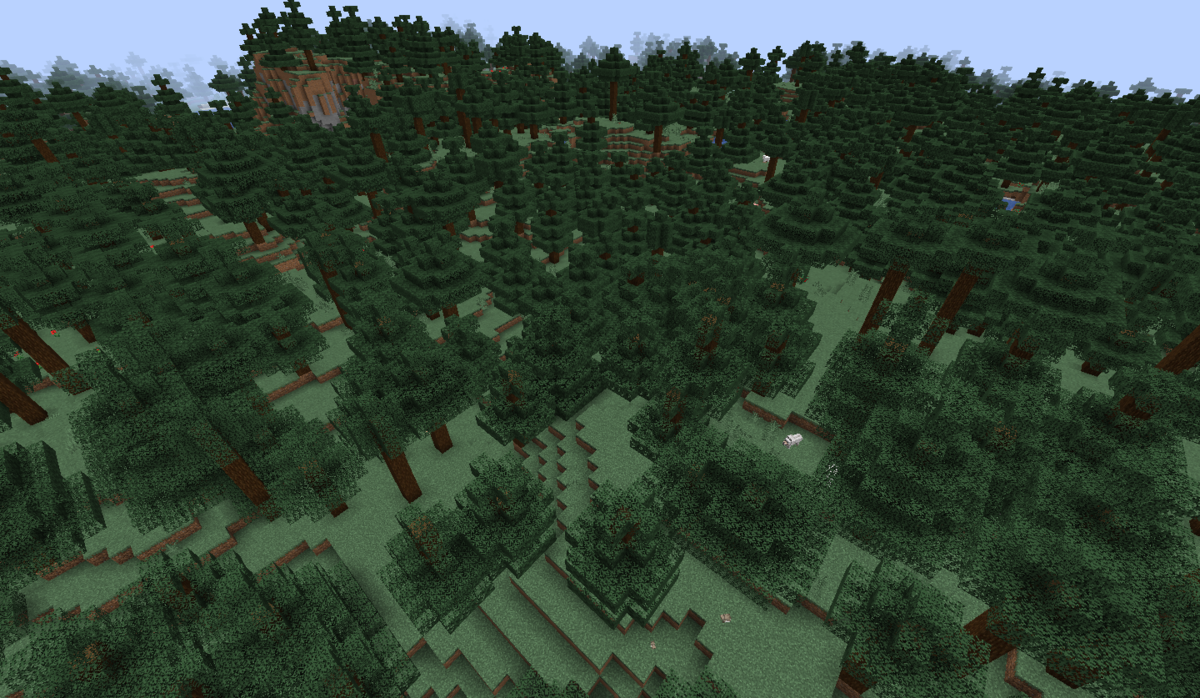 A snowy tundra biome is a vast amount of land covered in snow with a scarce amount of wildlife spread. Polar bears and rabbits can be found here.

The ice spikes biome is a rare biome where large structures and clumps of ice are scattered around almost like trees. The resources within are even more difficult to find than the snow tundra biome, however the biome does have access to large amounts of ice.

Swamp biomes are usually one of the most dangerous biomes to survive in. Witch huts generate in these biomes and slime spawns occur naturally at night.

There are two variations of the savannah biome with the first being a normal savannah biome. Acacia trees can be found in this biome, along with herds of horses and llamas. Villages and pillager outposts can generate in these biomes as well. The other variation would be shattered savannahs. They can be recognized by the steep mountains scattered throughout. More traits include deep lakes, waterfalls of lava or water, and random craters.

There are three variations of the badlands biome the first being the badlands. This biome contains large veins of gold and lots of red sand. Abandoned mineshafts are about the only structures you will find here and hostile mobs spawn at night. Eroded badlands are a rarer variation, with canyons in sight. Eroded badlands will often generate on their own unlike the original badlands which are common to find next to deserts. Wooded badlands are a smaller biome in which you will often find oak trees in small numbers.

Beach biomes are constructed anytime an ocean meets another biome. They are primarily made up of sand. You can find sugar cane, shipwrecks, buried treasure, and turtles here. Snowy beaches can also be found in which a beach is covered in a blanket of snow.

The Stone shore biomes are often found when a mountainous biome is generated near an ocean. These biomes are usually very small.

River biomes are usually found when they cut through multiple biomes, they can contain sugar cane, sand, clay, squid, salmon, and drowned within them. Frozen rivers are essentially the same except with snow. They also have a reduced number of hostile mobs that can spawn.

There are five variations of ocean biomes with the first being a basic ocean where seagrass, kelp, and fish commonly found. Warm ocean biomes are usually identified by their vibrant appearance. These biomes can naturally generate coral reefs in which you can find dolphins, pufferfish, and tropical fish. Lukewarm oceans do not contain coral reefs but contain more seagrass and kelp. They also gain cod, salmon, and the possibility for ocean monuments. Cold ocean biomes have less aquatic wildlife but still have cod, salmon, and dolphins. Ocean monuments can still be found here, and the water has a deep blue hue to its coloration. Frozen ocean biomes only contain salmon and squid. Polar bears can be found sometimes on the surface of the water where there is ice. They also can contain ocean monuments.

Mushroom field biomes are a very rare biome that usually generate far away from any other biome  in the middle of the ocean. These are large islands composed of mycelium that accelerates and encourages the growth of mushrooms. Mooshrooms can be found in this biome. Additionally, no hostile mobs can spawn in this biome.

The Nether biome is separate from the overworld. The Nether has recently updated to include multiple biomes including Soul Sand Valleys and Crimson forrests. There are Nether Fortresses containing exclusive resources. Mobs such as Blaze, Hoglins, Piglins, and Ghasts can be found here. With the new biomes and respawn anchors you can make The Nether your permanent home!

The End biomes are usually comprised of five features in the biome. The end is separate from the overworld and nether and is guaranteed to generate whenever the player creates an end portal. There is a giant center island surrounded by several smaller areas and islands. End islands are the smaller islands that are floating between the voids and the larger parts of the end. Enderman can be found here. End midlands are larger areas that transition you from the center to the outer edges of the End. They contain Shulkers, Enderman, End gateway portals, and End cities. End highlands are the main biome in the end where you find end cities and chorus trees.  They are commonly found at the outermost edge of the void. End barrens are usually found towards the edges of the main areas or land in the End, like beaches in the overworld.

Was this article helpful?